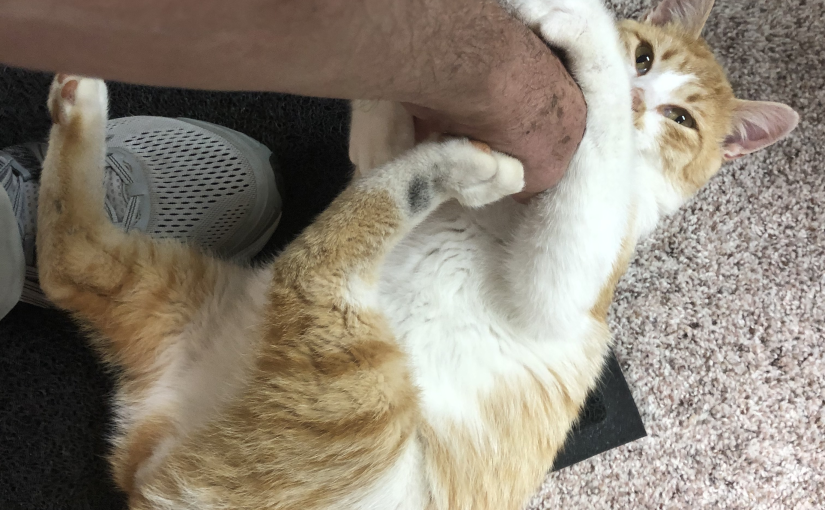 I was on the way home from town when my wife told me on the phone. I had that sinking feeling. “We’ve got a new cat.”, she said.

I don’t mind cats that much. But, they are a lot of work. Though we were down to four due to the oldest two passing. (Did I mention I’m the one who does cat-box duty?) The youngest is a calico who was “rescued” by my stepdaughter, who couldn’t keep it, of course. She found it as a kitten. It was crying in the park in the rain over one-hundred miles from where we live. Jill brought it straight to us. Where else? After the initial three-hundred dollar visit to the vet, I named her Pricey. What can I say? I am easily amused. Pricey is probably four years old now.

All the cats came that way, more or less. Neither my wife or I actually tried to get a cat. At least, I don’t think so.

Two days before that phone call, one of my wife’s friends called her with a litter of newborn kittens which the mother had abandoned. That happens sometimes. My wife has had some significant experience fostering and placing kittens. So, she agreed to take them. That is pretty much a full-time job at first. Everything else kind of comes to a stop. She is a little over a week and a half in now and they all have their eyes open.

That is the backdrop against which the news that, “We’ve got a new cat” came to me.

That is his picture that heads this post. Someone had apparently dumped him near our farmhouse. It must have been quite a while before he found my wife outside on the porch. My wife was waiting for Lady the permanently-fostered Pit Bull to finish her outside business. The cat came running when he saw her. He had been down near the road, which is about one-hundred yards from the house. There is a creek down there across the gravel road where a cat could get water to drink.

He was severely underweight. Clearly very friendly. Obviously didn’t know how to hunt for himself. His first trip to the vet was only a little over $100. Males are cheaper to neuter. Besides, “Pricey” was taken. It seems like he has eaten non-stop for the first week. He is starting to look better. And, as the picture shows, now he will now opt for a neck-scratch before diving into the cat food.

I named him “Covid”.

The name is part of the story I tell myself to lessen my tendency to condemn callous cat-dumpers. Here is how it goes:

Constrained to “shelter in place” and out of a restaurant job due to shutdown orders, the father struggled with the choice to feed the kids adequately for the next few days or buy another bag of food for the cat. He decides the cat could get lost near a farm in the country and the kid’s wouldn’t have to know how it disappeared. He didn’t like the choice, but he felt he had to make it.

That’s my story. No other hard choice would explain it, really. Surely not just convenience. I can’t make my mind be OK with that.

I don’t know how long Covid managed to evade the coyotes that often howl hereabouts at night. Long enough to begin to border on starvation. It was probably the ability to drink from the creek that saved him long enough to catch someone outside.

I suppose it remains to be seen how much trouble it will be when we try to introduce him into the rest of our little cat population. At least I am working and Covid will get to eat on a regular basis.

12 thoughts on “The Face of Abandonment”